The Battle of Bannockburn in 1314, Scotland

You are here: HOME | Articles | Battle of Bannockburn 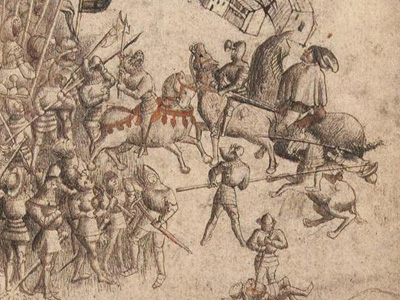 Depiction of the Battle from circa 1440

The battle of Bannockburn in Scotland was fought between the armies of the English under King Edward II and the Scottish leader Robert the Bruce, self-appointed King of Scotland, and began on 23 June 1314. Robert the Bruce was trying to establish an independent Scotland, and the English King Edward II was attepting to relieve Stirling Castle, previously besieged by the Scottish forces. Both armies met at Bannockburn, near Stirling in southern Scotland where the Scots army was outnumbered about three to one. The Scottish forces were mostly infantry armed with long spears supported by a few archers and little cavalry. The Scottish army was basically split into three main formations. The vanguard was commanded by the 1st Earl of Moray, Thomas Randolph, and was positioned near the church of St. Ninian, the rearguard was commanded by Robert the Bruce, and the main fighting force was led by Bruce's brother, Edward.

Robert the Bruce's army was able to choose their ground to the south of Stirling castle carefully and the terrain at Bannockburn was ideal with good natural cover. The Scottish position had a narrow approach with soft, boggy ground. This would play havoc with the advancing heavy cavalry of Edwards's army, and the English would be forced to fight the Scots head on.

The battle of Bannockburn began when an English knight, Henry de Bohun, spotted the mounted Scottish King and charged at him alone on his heavy horse. Robert the Bruce remained calm and waited until the knight was almost upon him, then stood up in the stirrups and killed Henry de Bohun with a severe blow to the head with his axe. The Scots then forced the demoralised English cavalry to withdraw and prepare for the main battle the next day. The English army had an uncomfortable night resting and sleeping on the cold and wet boggy ground. In the morning, the Scottish King Robert the Bruce assembled his army in a dense formation and they all knelt in prayer before the battle began. The English cavalry began the battle by making repeated charges against the Scottish infantry who were armed with spears. The charges had little effect and the English could not break through the Scottish lines. Following a subsequent archery duel the Scottish army advanced quickly on the English, killing Sir Robert Clifford and the Earl of Gloucester. Vicious hand to hand fighting ensued with both armies locked together.

Following the appearance of a large group of Scottish camp followers later in the day, which the English mistook for fresh Scottish troops, the English army hurriedly withdrew from the field. During the rushed withdrawal the English were harassed and pursued over the wet boggy ground by the Scots back to the steep sided river at Bannockburn. This was now the time for the English King Edward II to withdraw from the battle and find safety. Edward was accompanied by his personal bodyguard and the Earl of Pembroke and both eventually reached the English occupied castle at Dunbar. Knowing that their king had deserted them the English army panicked and lost the will to fight on. The battle of Bannockburn was over and was a decisive victory for Robert the Bruce and the Scottish army. The seal was now set on the bid for Scottish independence from England.

Today, a modern monument and Visitor Centre stands near where it is believed the battle took place in 1314 and is one of the most popular tourist attractions in the area.