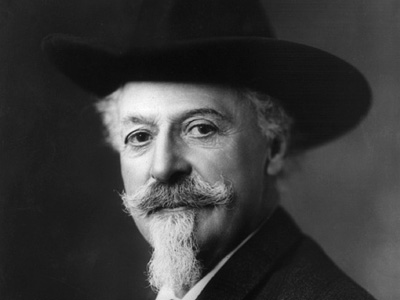 Buffalo Bill and the American West

Buffalo Bill was a hero of the wild west, whose real name was William Frederick Cody. He was born in 1846. When he was only fourteen years old he used to ride seventy-five miles a day with The Pony Express, which carried mail by relays of ponies nearly two thousand miles across the American continent. Cody became a scout and a guide in the United States army; later he enlisted in the cavalry and fought until the end of the American Civil War.

He gained his nickname of Buffalo Bill in 1867, when the Kansas Pacific Railway was being built across the wilds of North America. He used to shoot bison to supply the workers with meat, and the Americans often call bison by the name of buffalo.

In the following years Buffalo Bill fought with the army against the Sioux and Cheyenne Indians, and in 1876 he killed the Cheyenne chief Yellow Hand in a single combat at Indian Creek. He founded a Wild West show in 1883 and brought it to Europe four years later. Buffalo Bill died in 1917.