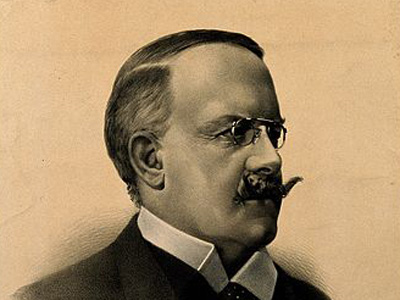 Born in Dublin, Ireland, Tom Barnardo had a religious experience in early manhood which led him to offer his services as a medical missionary in China, and for this purpose he enrolled as a medical student at the London Hospital. In the capital he found the streets of the East End swarming with children - dirty, ragged, hungry and neglected. Longing to do something for them he hired a donkey stable and opened a "ragged school".

One cold, wintry night a small boy, aged about ten, clad in rags, begged to be allowed to sleep in the stable. His name, he said, was Jim Jarvis, he had no father, no mother, no home, and there were many others like himself in London. Barnardo took the youngster to his own home and at midnight the two of them went out to track down some of these homeless lads. On the roof of the old rag market in Houndsditch, Jim revealed to his astonished companion 11 boys fast asleep, their hiding place completely concealed by a projecting wall. Later, under Jim's guidance, Barnardo became familiar with a number of other hiding places where homeless boys slept.

One evening, at a large missionary gathering, Barnardo was called upon suddenly to speak and thrilled his audience with an account of his midnight experiences in London's underworld. However, there were doubters who wrote to the papers challenging his statements. Lord Shaftesbury read these letters and got into touch with Barnardo who undertook to guide a party that very night to where homeless boys could be found. At the Queen's Shades, Billingsgate, he drew forth 73 boys sleeping under a tarpaulin which covered goods and "empties".

As the date for his departure for China drew near, the young student became more and more concerned about the future of his work in London. His ragged school was flourishing in larger premises, a mission he had started for waif boys was going well and he had boarded out about 20 others. His influence over these rough, awkward lads was great and many friends, including Lord Shaftesbury, urged him to remain in England and extend the work for which he was so well fitted.

The arrival of a letter from a stranger, offering to provide £1,000 to start a home for destitute boys if Barnardo would take charge of it, brought the matter to a crisis. It seemed such a definite answer to his earnest prayers for guidance and he hesitated no longer; clearly his life's work lay in London, not in China.

His first Home was opened in 1870 at 18 Stepney Causeway, in the East End of London. Determined not to run into debt, he made a rule only to admit as many boys as he had money to provide for. When little "Carrots" pleaded, one wintry night, to be taken in, he could only be promised the next vacancy. A few days later this boy's body was discovered in an empty cask, and the coroner's verdict was "death from exhaustion due to frequent exposure and want of food." Barnardo was deeply affected by this tragedy and, with heroic faith, resolved that in future, debt or no debt, no destitute child should be refused admission. That resolution has been kept by Dr. Barnardo's Homes ever since.

In 1873 Dr. Barnardo, as he then was, married Miss Syrie Louise Elmslie and at once extended his work to destitute girls. At Barkingside, Essex, a beautiful village gradually took shape, each ivy-clad cottage housing a family of girls with a "mother" in charge. The number in his care grew until it numbered more than 7,000 boys and girls. Branch Homes sprang up and over 3,000 children were boarded out in private homes in country districts. Dr.Barnardo did much to encourage emigration and altogether he settled 10,000 of his young people in Canada.

Full of energy and vitality, he seldom left his office before midnight. Again and again he showed up absurdities and injustices in the laws concerned with children and it was largely his efforts which brought about the passing of the Custody of Children Act in 1891. He edited four magazines - Night and Day, Children's Treasury, Bubbles and Young Helpers' League. To help people in acute distress he started a scheme of first aid for starving infants, free meals for hungry school children, free medical and nursing attention for the poor and grants of money to help aged women to pay their rent.

Dr. Barnardo had seven children of his own but three of them died in childhood. He himself died in 1905. In the short space of 40 years he had raised the sum of £3,250,000, established a network of Homes for homeless children and rescued 60,000 destitute boys and girls. His work remains a lasting memorial to him.