Florence Nightingale - Lady With The Lamp 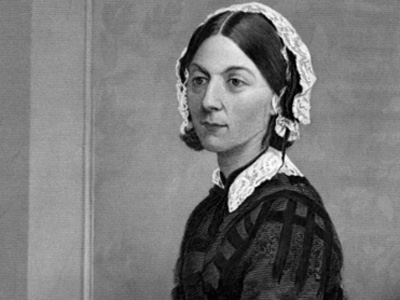 Florence Nightingale is recognised throughout the world as the founder of modern nursing. She was born in Florence, Italy on 12 May 1820 and was named after the Italian city. She was a beautiful young girl and could have had an exciting and carefree life as her parents were wealthy and well respected. However, when she was about 17 years of age she felt that God was calling her for special work. By the time she was in her mid-twenties she had become determined to care for and nurse the sick and injured. Her parents were against this calling because in those days hospitals were overcrowded and dirty, and nurses were generally rough uneducated women. They felt it was beneath her so they prevented her from becoming a nurse. Although her parents did not want her to be a nurse, Florence Nightingale did visit hospitals and sick people and made herself an expert in the way hospitals were run. This also gave her the knowledge to form her own ideas about how hospitals should be organised and improved.

Florence Nightingale's first real experience of nursing the sick was in 1851 when she went to Kaiserworth in Germany to assist some church nurses. About two years after that, and in spite of strong opposition from her family, she became superintendent of a hospital for sick ladies in Harley Steet, London. This is where her knowledge and abilities of hospital organisation came into play. Her big chance came in 1854 when, in March of that year, the Crimean War broke out between Britain and Russia. Just six months later it was common knowledge that great numbers of wounded and sick soldiers were lying uncared for in dreadful conditions. The Secretary of State for War, Sidney Herbert, was a close friend of Florence Nightingale and he asked her to organise a party of nurses to run the hospital at Scutari, on the northern shore of the Sea of Marmora. She left England on 21 October 1854 with 38 nurses all ready and willing to help. When the group arrived at Scutari they were dismayed to find the hospital short of supplies, dirty and without any proper organisation. With typical determination and much courage Florence Nightingale managed to transform the hospital and obtained food, clothing, sheets, bandages and other essentials. She used to make an inspection tour of all the wards every night carrying a lamp. This is why she became known as the lady with the lamp.

Florence became a national heroine and a sum of £45,000 was collected for her to use as she wished. This was a considerable sum in those days. She used it to start The Nightingale School for Nurses at Saint Thomas's Hospital in London where a system for training nurses was set up. In the same year, 1860, she finally published her interesting and lively Notes on Nursing. Sadly, ill health prevented Florence Nightingale from nursing any more but she still continued to do an enormous amount of work including advising the War Office on army medical services and sanitation in India, encouraging the setting up of the district nursing services and being involved in all sorts of medical problems.

She died on 13 August 1910, and was buried at St. Margaret's Churchyard, East Wellow, Hampsire, her coffin being carried by six sergeants of the British Army.