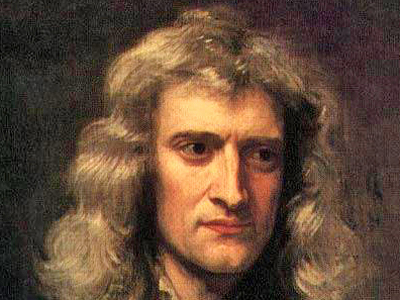 Isaac Newton was born a prosperous famer's son in Woolsthorpe, near Grantham, Lincolnsire during 1642 and became one of our greatest physicists and scientists of all time. From an early age he showed great interest and skill in making things for the great outdoors such as kites, windmills and sundials. When he was just 18 years of age he went to Cambridge University (he later became a fellow of Trinity College) where he studied mathematics until the university closed in 1665 because of the great plague. Thereafter, he continued to study mathematics at home. It is here that while in the garden at Woolsthorpe he noticed an apple fall from a tree and he began to wonder why it should fall straight downwards. After some thought, his conclusion was that it must have been the earth that had attracted the apple and this led him to work out his theory of gravitation. It was about this time that Isaac Newton discovered the nature of white light by passing a beam of light through a prism and he subsequently developed his theory of colour from this work. This work led him to further discover various methods for making difficult calculations. These were important and exciting discoveries by a then unknown person, who later went on to become a professor of mathematics at Cambridge in 1669. Isaac Newton built the world's first reflecting telescope in 1668 and the largest optical telescope made on the same principle. His work on applying the theory of gravitation to the movement of planets solved many of the problems at the time.

Isaac Newton progressed to writing and his most famous book was published in 1687 with the support of his friend the astronomer Edmond Halley. It was called Principia and was considered to be the greatest single work of science ever written at the time. Principia contained details of his work on the laws of motion and the theory of tides and gravitation - this set the view of the physical universe for the next three centuries. In another book called the Opticks he described his theory of light as well as other mathematical calculations in 1704.

Although Isaac Newton had little interest in politics he became a Member of Parliament for the University of Cambridge twice. He was also the Warden in charge of what was to become the Royal Mint where he had to work on reforming the coinage. However, his great pleasure was becoming President of the Royal Society in 1703 - an office which he held until his death in 1727.

Isaac Newton never sought fame because he was a modest man who cared little for the opinions of others and he generally disliked arguments and disagreements of any kind. Unfortunately, this didn't stop him from arguing with his fellow scientists often for lengthy periods. Nevertheless, Queen Anne knighted him in 1705. Isaac Newton later admitted that his discoveries at least owed something to the work of other scientists and he once said If I have seen further than most men it is by standing on the shoulders of giants. In 1727 he was buried in Westminster Abbey in London.