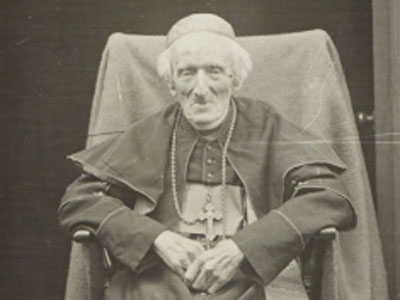 John Henry Newman was born in London on 21 February 1801 and was one of the most outstanding churchmen of the 19th century. He started his adult life as a clergyman in the Church of England and helped to lead a religious movement called the Oxford Movement. Later on he became a Roman Catholic priest and eventually a cardinal.

After studying at Oxford University he remained in or around Oxford until 1843, and was connected both with the University and the Church of England during those years. There he met John Keble and together with some other scholars they started the Oxford Movement. The movement's supporters emphasized the importance of keeping to the historic teaching of the church down the ages, for in many cases this had been largely forgotten. John Henry Newman was appointed vicar of the university church of St. Marys and his teachings and sermons there quickly became famous.

However, the more he studied the teachings of the Church of England the more he was drawn to the teachings of the Roman Catholic Church, for it seemed to him that it was the only true church. After a great spititual struggle within himself in 1845 he left the Church of England and became a Roman Catholic. Two years later he was ordained a Catholic priest. His book Apologia Pro Vita Sua sets out his reasons for the change of belief. Between 1854 and 1858 John Newman was rector of the newly started Roman Catholic University in Dublin. He was made a cardinal in 1879 by Pope Leo XIII.

John Henry Newman wrote the hymns Lead, kindly Light and Praise to the Holiest in the Height. The latter is part of a long poem The Dream of Gerontius, describing the journey of the soul to God at the hour of death, which was set to music by Sir Edward Elgar. John Newman died in 1890 and was buried in the grave of his great friend and fellow convert Ambrose St John in Rednal Roman Catholic Cemetery in Rednal, Warwickshire. He was declared 'Venerable' by Pope John Paul II in 1991.