The Recent WW2 History of Malta 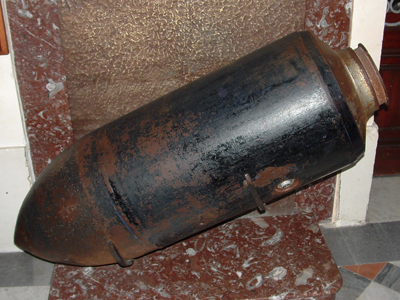 Imitation of German Bomb in Malta

Along with the Great Siege of 1565, the most documented period of Malta's history is the Second World War. The Islands strategic location once again made it centre stage in the theatre of war in the Mediterranean: a key stronghold from which the Allies could sustain their North African campaign and from which they could launch their eventual attack on mainland Italy.

Before that happened though, the Islands were subject to some of the most severe bombardments of the entire war. The Maltese people may have ended the war with the distinction of being the only entire population to be awarded the George Cross, Britain's highest civilian honour for bravery. But they also ended the war devastated: Malta holds the record for the heaviest, sustained bombing attack: some 154 days and nights and 6,700 tons of bombs.

The British were unsure of whether they could adequately retain or protect Malta. While a perfect strategic location, it was also a difficult place to defend. First Lord of the Admiralty, then Winston Churchill, decided that Malta was vital to war plans and important for supply lines.

Malta entered the war sharply and suddenly. The day after Mussolini declared war, the 10th June, 1940, Italian bombers attacked Valletta and its harbours. The British had only three biplanes on the Islands nicknamed Faith, Hope and Charity. You can see 'Faith', now restored, in the National War Museum, Fort St Elmo, Valletta.

Malta became a base for Allied attacks on enemy ships plying supply routes to North Africa and on the Italian air and naval bases. In return the Islands were under constant attack, in a game of return fire. As Churchill predicted, Malta was vital to reducing the effectiveness of the enemy's North African push. But that gain came at a price. The Islands were always high on the enemy's agenda. Stuka bombers based in Sicily were to pound Malta into submission. Malta's record, that of the heaviest sustained bombing, took place in 1942, and is known as 'The Siege of Malta': the 20th century warfare version of the Great Siege of 1565. From April throughout the summer that year, the Islands were pushed to the brink, almost to capitulation.

Miraculously, a supply convoy, or rather its bombed remnants, limped into Grand Harbour on 15 August. The severely damaged oil tanker, Ohio, and a couple of warships with limited rations, saved the Islands from submission and starvation. The ships were named the Santa Marija Convoy because the 15th August is the religious feast of the Virgin Mary.

In 1943, Malta was one of the launch pads for the Allied invasion of Sicily and later push into Italy. The Italian navy surrendered on 8th September, by coincidence the very same day on which 378 years earlier the Great Siege had ended. The end of the war saw the Islands economically and physically devastated. In 1947, the Islands were granted some £30 million to help rebuild. But it took several decades and further restructuring once the British forces left Malta completely in 1979, to rebuild the economy.

This article has been reproduced with the kind permission of the Malta Tourism Authority.