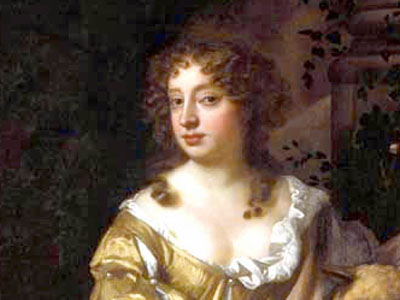 Before Nell Gwyn became an actress she used to sell oranges in the Theatre Royal, London, and it was here as a young girl that she became interested in acting and performing on stage. Her first performance was in the play called The Indian Emperror when she was just 14 years old. This was also when the English king at the time, King Charles II saw her and immediately fell in love with her. Nell Gwyn was a good-natured, happy girl full of good humour and high spirits. She had beautiful reddish brown hair and was rather short and, considered by some, not particularly good-looking.

Nell Gwyn was a favourite with the people and with the King. However, she had a rival for the King's affectons. It was a Frenchwoman called Louise de Keroualle who had earlier been made the Dutchess of Portsmouth. The people disliked Louise de Keroualle because she tried to influence King Charles II into favouring France and Roman Catholicism. They saw Nell Gwyn as standing for the English way of life and the Protestant religion but she never took any interest in politics, although at about this time it is believed that Nell Gwyn persuaded the King to establish the Royal Hospital at Chelsea in London as a home for aged and disabled soldiers. This further endeared her to the people.

When King Charles II was dying he said to his brother James the words Let not poor Nelly starve. James, who succeeded the King as King James II, gave her the Bestwood Park estate near Nottingham. Nell Gwyn was buried in the church of Saint Martin-in-the-Fields, London.

>
Back to Articles Index