You are here: HOME | Articles | Rabbits 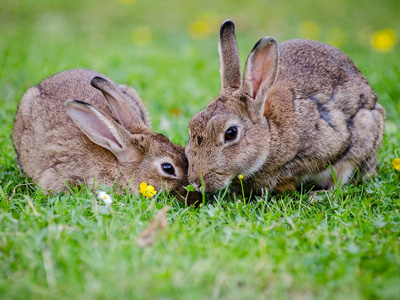 Image by skeeze from Pixabay

About Wild Rabbits and How They Live

Wild rabbits live in burrows or underground passages which they excavate, by means of their strong hind-feet, in the soil of sandbanks, fields, woods, etc. The animals are sociable, and the burrows belonging to any one community are collectively known as a warren. The passages of the warren communicate with the outside world by means of openings, some of which are in common use, while others seem to be used mainly as "bolt-holes" in cases of sudden alarm. A rabbit which is bolting to its burrow exposes the white underside of its tail, and thus acts as a danger signal and guide to its fellows. When a rabbit is startled, or puzzled by seeing some unusual object, it generally thumps the ground with its long hind-foot; other rabbits in the neighbourhood are thereby warned.

It is common to find outside a rabbit warren a number of intersecting paths, perhaps nine inches wide, and worn smooth by the patter of little feet. These are the highways, or "runs," which lead from the holes of the warren to the various feeding-grounds.

Rabbits breed very rapidly; it has been estimated that in five years a single pair might have about a million descendants, were it not for the countless mishaps to which rabbits are exposed. The young are born and suckled in a special shallow burrow, which the doe excavates and lines with dry leaves, fur, etc. When she leaves the nest for any purpose she covers up the entrance with soil.

The proportions of the parts of the body of a very young rabbit are markedly different from those of the adult. The head is relatively larger, the tail longer, and the ears shorter; while the hind limbs and fore limbs are of almost equal length. During the first six months of its life the animal gradually takes on the proportions of the adult - with small head, long ears, large hind legs with long feet, and small, upwardly-turned tail.

A rabbit is able to stand upright on its hind legs, and to maintain itself in this position for a considerable time. It thus obtains a wider view and a greater choice of food. The great difference in the length of the fore and hind legs gives the animal a characteristic gait. In a freely moving rabbit both fore-feet stop when the hinder come up - one hinder foot slightly behind the other, and rather wide apart. Rabbits are exclusively vegetarian feeders, living on green herbs and on the tender shoots and bark of shrubs and young trees.

The External Characters of the Rabbit
The outside of the rabbit's body is almost entirely covered with fur. This consists of two kinds of hair - coarse and fine. The coarser hairs are fewer in number and longer than the fine ones, which they protect from wet. The fine hairs are extremely closely-set, and stand straight out from the skin.

The longest hairs of the rabbit are the stiff whiskers which stand out from the upper lip, the cheeks, and above the eyes. They are extremely sensitive to touch, and are of great assistance to the animal in finding its way through the dark burrows.

The colour of the wild rabbit is greyish brown, except on the belly and under the tail, where it is white. This colour harmonises well with the surroundings, and renders the animal much less noticeable. Wild rabbits are exposed to so many enemies, that individuals which happen to be born with conspicuously coloured fur have generally but a poor chance of surviving and leaving offspring to inherit their disadvantages. There is thus in each generation a natural selection of the animals which are best protected by their colour from observation. Among tame rabbits, on the other hand, protective colouration is of very little importance, and one variation of colour is as likely as another to be transmitted by heredity to the next generation.