The Sacred River Ganges in India 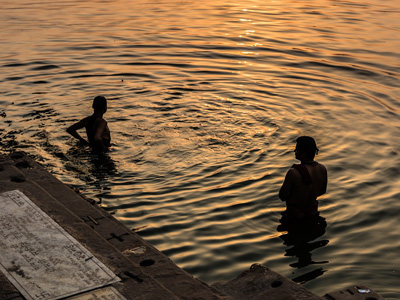 Image by D Mz from Pixabay

River Ganges and its Course

The Sacred River Ganges flows for over 2,400 kilometres from the central Himalays to the Bay of Bengal in India and thousands of villages, temples and settlements are spread over the great plain through which it flows. More people live in this region than in any other part of India. Bathing in the waters of the River Ganges is believed to wash away sins and cure disease, and for Hindus, to die on the banks of the River Ganges and to have one's ashes scattered on its waters is to be sure of a happy future life. Although many places on the banks of the River Ganges are considered holy, some are more holy than others. Hardwar is a typical example as it's where the cold stream, fed from the snow and ice on the lonely peaks of the Himalaya Mountains, enters the great plain of northern India. There is also the holy city of Benares which is about 1,000 kilometres lower down where the banks are lined with temples all having easy access to the River Ganges. It is here that in the early mornings, thousands of pilgrims, some with sick relatives, wait for the first rays of sunshine to touch the sacred waters. The pilgrims and relatives then wash and bathe.

The River Ganges is often known as Mother Ganges because the food for millions of people depends on its waters. When the summer rains join with the melted snow from the Himalayas the small rivers fill and cause the River Ganges to rise rapidly and flood the lower parts of the plain, soaking the soil so that it is ready for planting. Sometimes when the River Ganges rises quickly buidings and structures can be washed away, but always when the flood has passed and the waters have receded it has left a coating of new rich soil behind. In the hot dry season its waters are sometimes led to the field by ditches so that a second crop can be grown.

Along the course of the River Ganges it passes some great cities such as Delhi and Agra, with long histories and famous old temples and palaces. Other places such as Cawnpore and Lucknow, Allahabad and Patna have great markets and commercial centres. At last the River Ganges breaks up into many channels which flow through a marshy delta. These channels mostly go through Pakistan where the largest called the Padma, is joined by the great Brahmaputra from the north. However, the most important branch for ships and therefore trade and transportation is the Hooghly, which flows southwards on the Indian side of the border. On the banks of the Hooghly stands Calcutta, the largest city in India.