Himalayas are the World's Highest Mountains

You are here: HOME | Articles | The Himalayas 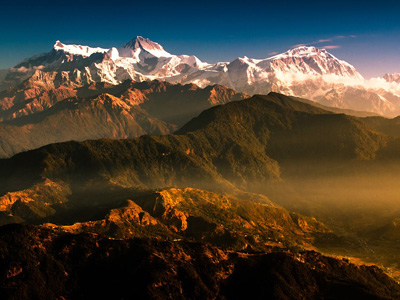 Image by Ambir Tolang from Pixabay

The Highest Mountain Range in The World

The name Himalaya means The Dwelling Place of Snow and it is a most suitable name for this, the greatest and highest range of mountains in the world. The Himalayas stretch for about 2,500 kilometres along the northern borders of India and Pakistan, from the Indus River in the West to the Brahmaputra river in the East. North of them lies the great plateau of Tibet. The middle part of the Himalaya range is about 325 kilometress wide and is made up of mmany high and rocky ridges separated by deep valleys.

In summer, when the monsoon wind blows up the valley of the Ganges River from the Bay of Bengal and brings drenching rain storms to the lower ranges, it is not rain but snow that falls on the higher ground where it is colder. Above about 4,000 metres snow lies all the year round, even when the lower land of India, which is not far away, is sweltering beneath a burning sun. Since more than 70 peaks of the Himalayas and the ranges nearby are over 6,100 metres high, it can be seen that a very great deal of snow lies upon them all the time. Even the passes over which the climber or traveller has to toil are usually more than 3,500 metres above sea level and so are often deep in snow.

Only a few climbers and their porters have ever been able to reach most of this snow-covered land. The people who dwell below the snowy wastes believe that strange beings live there and cause blizzards and avalanches when men enter and disturb the secret places of the mountain. They tell stories about a race of giants known as The Abominable Snowmen whom they believe to live in the hidden places. To prove that they are right the inhabitants point to huge footprints occasionally seen on the snowfields which they say are made by these giants. Such footprints have only been seen a few times and experts believe that they are made by langurs or else by small black bears.

The Himalayas were formed by great movements in the Earth's crust more recently than most other mountains and the process is still going on, for earthquakes often occur along the southern edge of the Himalaya range. Sometimes the shaking of the Earth's surface causes great landslides and on one occasion a whole mountainside slipped down into a valley blocking one of the rivers of Assam and so causing a great flood. Many of the rivers of northern India flow from the Himalayas. The people regard some of them as holy rivers and the Ganges is especially sacred and worshippers make pilgrimages to the gaps where the streams flow out from the mountains.

When India was under British rule many Europeans used to travel up into the lower ranges of the Southern Himalayas in the hot season, away from the dusty, fever stricken low land. Health resorts such as Simla and Darjeeling were built in the cool, wooded hills. From Darjeeling one can see the great mass of Mount Everest rising above a group of snow-clad peaks. It is the highest peak in the world, more than 8,800 metres, and it was climbed for the first time in 1953 after several early attempts had failed.