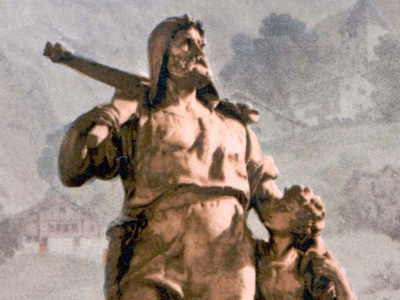 William Tell and His Son in Switzerland

For centuries the people of Switzerland were engaged in a bitter struggle to throw off the rule of Austria. From this struggle many legends sprang up, the best known of which is the story of William Tell, told first in the 15th century.

William Tell was a huntsman who lived in Uri, Switzerland. He was so skilful with his bow and arrow that he could shoot an apple off a tree 100 yards away. One day he went with his little son Walter to the village of Altdorf and as they passed through the market place William Tell noticed that a cap had been set up on a pole. He paid no attention to it until two soldiers came up and arrested him, saying that Gessler, the Austrian bailiff, had ordered everyone to bow down before the cap. Just then Gessler came riding by and stopped to ask what had happened. He had heard that Tell was a famous shot and promised to free him if he would show his marksmanship by shooting an apple off his son's head at 150 paces. Sadly William Tell agreed and drew out two arrows. One he stuck in his belt, the other he shot straight into the centre of the apple. Even Gessler cried out in admiration but before he would let William Tell go he asked why he had drawn out the second arrow. William Tell replied that it was to shoot Gessler if the first had killed his son. In anger Gessler ordered that William Tell be imprisoned for the rest of his life.

As the boat which was carrying William Tell and Gessler crossed the lake to the prison, a great storm arose. William Tell was an expert helmsman and Gessler had him freed so that he might steer the boat. When the boat came near the shore, William Tell seized his bow, jumped out and ran away to hide beside the path where he knew Gessler would pass. When Gessler came in sight, he drew the second arrow from his belt and shot him through the heart. Then, according to the legend, he roused his friends and together they stormed the Austrian castles and drove the Austrians from Switzerland.

Scholars now believe that William Tell never really existed, but they agree that he portrays the spirit of Switzerland. The legend inspired a great poetic play by Friedrich von Schiller and an opera by Gioacchino Rossini.